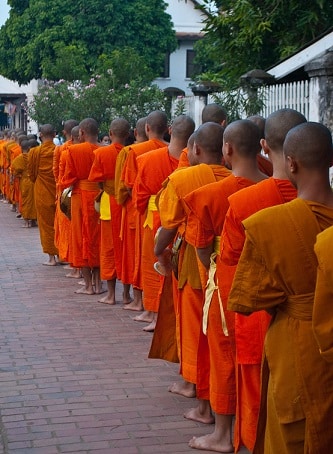 Have you ever arrived in a faraway place and known instantly that you were always meant to go there?

But that’s exactly the feeling I got when I landed from Cyprus and first stepped off the plane in Luang Prabang, Laos.

I’m not sure how to explain it, really. It was somewhat surreal, more a sense of immediate familiarity and belonging. Perhaps that I’d been here before – though I definitely hadn’t. After catching a glimpse of the tiny town from the air, I couldn’t wait to start exploring.

Until 1989, Laos was closed to tourism leaving it virtually cut off from the rest of Southeast Asia. Since opening their doors to the world slightly over two decades ago, Laos now has a steadily-developing economy, reliant on tourism and regional trade.

Situated in northern Laos, Luang Prabang is one of the richest and most visited provinces. It was designated a UNESCO World Heritage Site in 1995 meaning a blessed ban on buses and trucks. Most road traffic consists of bicycles, motorbikes, tuk-tuks and those traveling on foot.

Considered by many travelers and writers to be the heart of Laotian culture, the small and gentle town on the banks of the Mekong River is encircled by mountains and sits at 2,300 feet above sea level, keeping its climate relatively mild.

In Luang Prabang, most locals are asleep by 10:00pm and enforced curfews shut the city down to a crawl for the remainder by midnight. Though the town is definitely full of the backpacker set, it is by no means a party destination.

There are no large hotels (or large buildings of any kind) in Luang Prabang and most tourists opt for one of many simple guest houses lining the Mekong River.

There are also a few small boutique hotels – which was my choice. The Ramayana Boutique Hotel was charmingly unique, right in the center of town, steps from the banks of the Mekong and only $70US a night. Perfect for exploring the compact town center on foot.

The town’s entire historical section is dedicated to tourism, with everything from former royal palaces to more than 30 glistening Wats (temples) on the tourist trail. It’s all set against a backdrop of French colonial architecture and extensive natural beauty.

This former Royal capital still remains the main center for Buddhist learning in Laos and despite the large number of tourists, there seem to be equally as many monks about town.

Once I made the quick trip to my hotel and settled in, I was anxious to head back out and explore a little. I was dying to see the Mekong River and also hoping to squeeze in a hike up Phou Si Mountain to get a view of the town and visit Wat Chom Si before sunset.

The climb up to Wat Chom Si was well worth it for the incredible panoramic views from the top of the mountain. I spent some time taking it all in before heading over toward the Mekong River to relax for an hour or so and watch the sunset.

After an excellent sunset, I wandered through the night market which takes over the main road at dusk each day.

For dinner I found a trendy little spot near the market that was packed full – usually a good sign. I had a terrific meal and got to try a Beer Lao (one of Laos’ most popular exports) all for about $4US. That’s another great thing about Laos – like Thailand, your dollar goes a LONG way. At dinner I chatted with several other tourists who, like me, had just arrived and it seemed my immediate love for Luang Prabang was a common theme.

After dinner, the town was beginning to wind down so I headed back to my room – I had yet to sleep since the overnight flight from Cyprus the day before and despite my enthusiasm for the town, I was fading fast.

Plus, I was looking forward to getting a bright and early start since the real show in Luang Prabang starts well before dawn.

One of the must-do experiences in Luang Prabang is to observe the ritual of the monks leaving their temples en masse to receive morning alms.

A daily, pre-dawn event lasting about an hour, locals arrive in the dark to secure a spot on the street along the monks’ path. While tourists are allowed to participate in this event, it didn’t seem right to me, so I chose to observe from a distance. And it was a truly amazing spectacle.

Just as the morning sun began to rise, monks and novices by the hundreds (ranging in age from 10 to 60+) materialized seemingly from nowhere streaming through Luang Prabang’s historic temple district. They made a perfect square around the block, filling their bowls with alms from the locals along one street.

Then, they turned the corner to return some of their take to the local children waiting patiently with bowed heads and outstretched baskets. It was a moving experience to watch. Some in the town were obviously there to give, while others to receive.

What an awesome start to the day.

Morning alms complete, the monks disappeared as quickly as they had appeared and I walked the few blocks back to my hotel for breakfast. I spent the rest of the day wandering the streets of Luang Prabang and along the Mekong. I did a little shopping and even tried a Lao massage (priced similarly to the $6 Thai massages I love so much!).

It is impossible not to warm to the place. It’s one of the few countries I’ve ever been to that seems to be the genuine article and has retained its authenticity from its pre-tourism days.

I fell in love with the small-town, welcoming feel. I’ve never been somewhere that didn’t require any transportation other than to and from the airport (and honestly, I probably could have walked that). It was so nice to be able to walk anywhere I wanted to go.

And despite only being there 24 hours, I kept running into the same fellow tourists on the main street – which only added to the small-town feel. I would imagine if you spent a week there, you’d know the whole town by name.

I wish I had known when I planned my trip that I would love Laos so much, I would have stayed much longer. There are many things to see outside the city as well, beautiful waterfalls, caves, etc.

I will definitely be back someday to see more of what I believe is quite possibly Southeast Asia’s most beautiful and spiritual place.

But for now, it’s time to depart this magical place and head back to Bangkok!