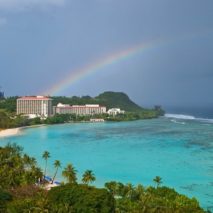 First inhabited by the indigenous Chamorros more than 4,000 years ago, the beautiful island of Guam occupies an important strategic position in the Pacific. Originally ceded to the U.S. following the Spanish-American War in 1898, Guam was later captured by the Japanese just hours after the bombing of Pearl Harbor in 1941. After almost 3 years of occupation, Guam was ultimately liberated by U.S. troops and has remained a U.S. territory ever since.  Today, visitors from Japan fuel the island’s primary industry – tourism – while 29% of the island’s land still belongs to the U.S. military. Guam’s natural beauty, rich history and post-card perfect beaches like Tumon Bay make it a terrific choice for a Pacific holiday and a perfect stopover between the U.S. and Asia. While my one day layover in Guam between the Philippines and Palau was mostly rainy, every now and then the sun emerged to wow with rainbow vistas like this one over Tumon Bay. 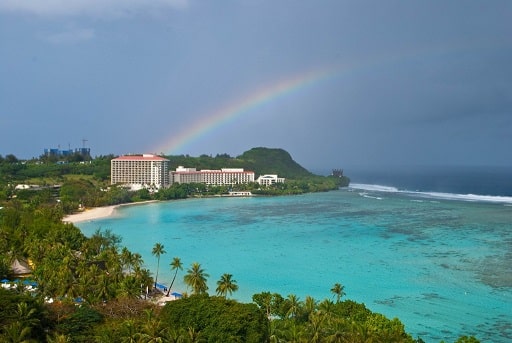 One of three rainbows that brightened a rainy day in Guam

Photo of the Day – Guam