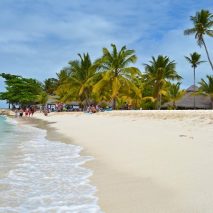 Famous for the natural beauty of its beaches, Saona Island is a protected nature reserve and part of the Dominican Republic’s Parque Nacional del Este. Located just a short distance from the mainland on the south-eastern tip of the Dominican Republic, the island was discovered by Christopher Columbus in 1494 on his way to the Americas. He named it Saona to honor the commune of Savona, his home at the time. The seas around the island are home to rich marine life including indigenous starfish that can be found dotting the many shallow sandbars surrounding the island. Saona Island is a great day trip whether you’re visiting the Dominican Republic for a week or just for the day on a cruise ship.