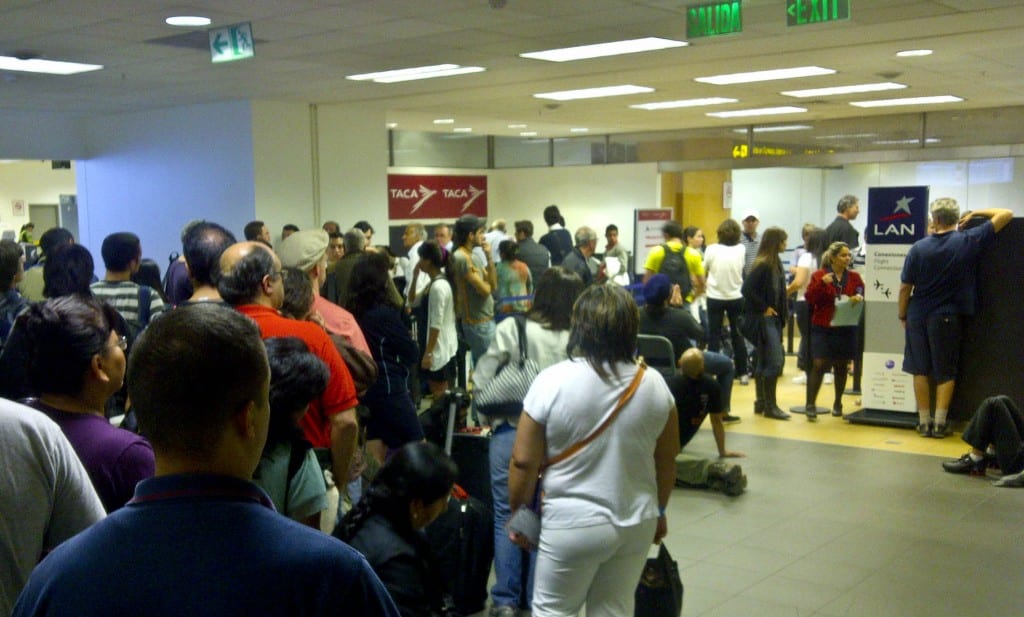 Well, let’s just say RTW #7 is off to a rocky start! Yes, RTW travel is not always as glamorous as it might seem. Today was one of those “Murphy’s Law” travel days and it’s only thanks to a few minor miracles and the complete inefficiency of LAN Airlines (actually working in my favor for once) that I am writing this to you now from my hotel on Easter Island, at last.

It all started out fine enough with a perfect Delta flight into Lima last night that arrived right on time at 11:00pm. But as soon as I stepped off the plane into the chaos that was the Lima airport, I knew something was amiss.

Of course, South American airports can sometimes be a little less civilized than those in the U.S. or Europe, but this was another level. As the Delta passengers entered the gate area on the way to customs, I was thankful we were separated by a glass partition from the agitated throngs waiting to board our plane.

It was apparent that some of these people had been in the airport for a while. They had the look. I noticed as I made my way to the transit area that the monitors showed a number of flights canceled for the night (including the last one to Santiago). I wondered why since the weather seemed fine and we didn’t have any delays on arrival but didn’t give it much thought.

Since my flight wasn’t until 8am I figured it couldn’t possibly affect me.

My night continued on a high note when I managed to work my way into the lounge that Delta shares with several other airlines in Lima. (Since I had a first class arrival boarding pass, they had to let me in.)

It was packed and people were sleeping on the floor everywhere but it was open 24 hours, had wifi, snacks and even showers so I figured I was set for the night. After a productive night of work, I decided to check my flight online around 5am. It all spiraled downhill from there.

Yep, you guessed it; my 8:00am flight had a bright red CANCELED flashing next to it. My connecting flight from Santiago to Easter Island, however, was still going as scheduled. I had to get another flight to Santiago in time to catch that flight. Easier said than done.

I soon learned that flights in and out of Lima had been canceled for two days thanks to a fog bank that had settled over the airport. It didn’t seem to affect my inbound flight, but the airport was in severe turmoil after two days with more than 50% cancellations.

The lounge agents were not airline employees, so my only choice was to get in a LAN customer service line that wound through the airport concourse in a manner vaguely reminiscent of the Great Wall. Or, try calling LAN via Skype from my laptop. I opted for the laptop and was eventually successful at getting a representative who told me my only option was a flight the next day to Santiago and since there was no Thursday flight to Easter Island, I wouldn’t be able to get there until Friday – 2 days later.

I took the flight but decided to try my luck with the customer service desk and resigned myself to a morning spent standing in line.

Four hours later, I finally made it to the counter to speak with an agent. At this point, my spirit broken, I had made my peace with the fact that I’d either be spending the next two nights in Lima or in Santiago…but the agent worked a miracle and got me a seat on the noon flight to Santiago getting me in with just 30 minutes to make the Easter Island connection.

(At this point I feel compelled to mention that the only reason I was able to even get on that flight was because I didn’t have any checked bags…score one for carry-on!!!) I didn’t have a minute to spare since it was after 11am by this time so I rushed to the gate.

All during the morning airline drama I had been emailing back and forth with the owner of my hotel on Easter Island who graciously allowed me to cancel the first two nights of my stay without penalty and then quickly re-instated them when it looked like I’d make it after all.

Excited, I boarded my noon flight to Santiago. And then we promptly sat at the gate for a full hour past departure time. With only 30 minutes to make my connection if we were on time, I was surely sunk.

By the time we landed in Santiago (90 minutes late) I didn’t think I had a prayer. But after clearing customs, I rushed to the departure terminal and was thrilled to see that for once LAN’s inefficiency had worked in my favor…the Easter Island flight was also delayed!! I ran to the gate and made it just in time for boarding.

Five hours later we touched down on Easter Island and I have just arrived at my hotel and can’t wait to go to sleep. I’ve been awake for almost 40 hours now and – crisis averted – it’s time to re-charge and enjoy the next five days exploring this fantastic island.

All’s well that ends well, right? And after all, with an inauspicious start like this…there’s nowhere to go but up!