Photo of the Day – Lefkara Cyprus 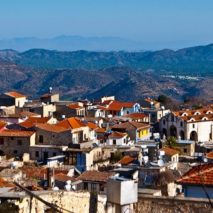 The village of Lefkara Cyprus is named for the limestone rocks of the region. “Lefka” meaning white and “ori” meaning mountains in Greek. The village is well-known for handmade lace and silverware art. Known as Aphrodite’s Isle, Cyprus is located in the Mediterranean between the coasts of Turkey and Syria. Because of its strategic location, it has long been a prize fought over by numerous conquerors. While today’s Cyprus has become a popular summer holiday hot spot for the European jet-set, there’s more to this divided isle than glitzy beach resorts. Take a drive into the Troödos Mountains in the Larnaca District for a glimpse into what Cyprus was like 100 years ago in the village of Lefkara. The traditional architecture incorporates “Lefkara stone” and clay-tiled roofs to give the picturesque community a distinctive look. The fresh mountain air and local handicrafts make Lefkara Cyprus the perfect escape from crowded summer beaches.

The hilltop village of Lefkara, Cyprus

Photo of the Day – Paphos Cyprus

Photo of the Day – Positano Italy