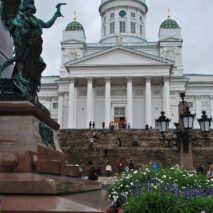 With a prime position on the shores of the Gulf of Finland, Helsinki is one of Scandinavia’s most beautiful capitals. Originally established by Sweden as a trading town, Helsinki later fell under Russian rule before Finland’s ultimate independence in 1917. The focal point of the city centre is the vast Senate Square, designed by German architect Carl Ludvig Engel and completed in 1822. One of the city’s most popular tourist attractions, Helsinki Cathedral occupies a prominent spot in Senate Square and was originally built as a tribute to the Russian Tsar, Grand Duke, Nicholas I. In the summer months, visitors can shop for souvenirs and Finnish food in Helsinki’s bustling Market Square or take a day trip by ferry to nearby islands. When in Helsinki, don’t miss the opportunity to take the 90-minute hydrofoil across the Baltic Sea to the lovely town of Tallinn, Estonia.

Photo of the Day – Tallinn Estonia