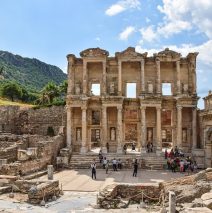 The 3-hour bus ride from Bodrum to Selcuk with Pamukkale Tours was much better than I thought it would be. It was a 26-seater minibus which seemed crowded at first and I thought, “well, this is going to be a long ride.” But once we pulled out of the station I was able to change from my assigned seat to the back row of the bus and spread out to get a little writing done along the way.

Oddly, the bus was quite the full-service experience. Fifteen minutes into our drive, a “flight attendant” type person suddenly appeared in the aisle handing out bottles of water. I hadn’t even noticed him on the bus before we left! He then proceeded to do another round passing out packaged snacks like pretzels and chips before making another round with coffee, tea and soda. I didn’t know what was coming next, I half expected him to whip up a casserole or something in an Easy-Bake oven. I’ve never seen this kind of service on a bus before but it was a nice surprise, totally worth the extremely reasonable $18 fare.

We arrived at the bus station in Selcuk right on time at 1:30pm and I figured while I was there I should try to find the train station to get my train ticket booked to Pammukale for the next day. I’d found a train schedule online but wasn’t sure how crowded the trains usually were so I thought it might be best to book a day ahead just to be safe.

A Travel Day from Kos to Bodrum 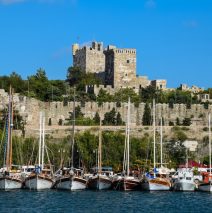 I had originally planned to spend a night on Kos while in transit between Symi and Bodrum but I ran out of time to research where exactly I wanted to stay and when I arrived in Symi I realized that’s where I wanted to stay. And based on what I saw of Kos (which I admit was just the main town) I think I made an excellent decision. The harbor area, while scenic and possessing the obligatory castle, was incredibly touristy to the point that I’m not sure I would have survived more than a few hours there. It clearly catered to the package tourist and 20-something European nightlife set, neither of which was a group I counted myself a part of. 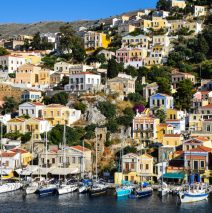 For those of us who are passionate about travel, there are many places in the world that we revel in visiting, maybe even fall a little bit in love with. But then there’s another level of travel experience, one that’s far more rare…a place that just calls to your soul.

If you’ve got a minute, the exquisitely-tiny island of Symi Greece would like a word with your soul.

Surprisingly, two months ago I’d never even heard of the island of Symi. But while trying to plan a route from Rhodes to Turkey, I happened to stumble across this little gem. Though there are a few direct ferries between Rhodes and the Turkish mainland, the more common path was to Bodrum via the islands of Symi and Kos. It seemed like a good plan to break up the 3-ferry trip with a stay on one of the two islands.

So, after a quick Google image search of both Symi and Kos, I was instantly taken with the pictures of Symi with its quaint pink and yellow, Venetian style architecture. I’d never seen a Greek island that looked like Symi and I knew right away that it was an island I had to see. Sometimes I just get a feeling about a place, so I decided to spend 4 nights on Symi, longer than I devoted to anywhere else but Crete on this trip.

All Roads Lead to Rhodes 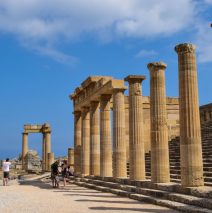 The largest of the Dodecanese Islands, Rhodes Greece has known many civilizations throughout its long history. Inhabited since the end of the Neolithic period (4000 BC), the city of Rhodes prospered for centuries during its Golden Age. In 164 BC Rhodes lost its independence and became a province of the Roman Empire during which time it developed into a renowned center of learning for arts and science.

During the Byzantine period that followed, Rhodes became an important military base and in 1309 BC it was sold to the Order of St John of Jerusalem. The order was originally founded to provide care for pilgrims to the Holy Land but ultimately evolved into a military unit. During the reign of the Knights of the Order of St John, the fortifications were expanded and reinforced.

When the Arabs attacked in the 7th century, they occupied the island for several decades. Then, in 1522 it was the Ottoman Turks who captured the city and during their rule Rhodes lost much of its international character. But the Italians took over in 1912 and set about radically transforming the city into much of what you see today. They completed extensive infrastructure works like roads and electricity, rebuilt the Grand Master’s Palace, preserved the remains of the Knights’ period and removed much of the Ottoman additions. 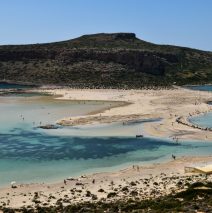 For centuries the natural beauty of Crete was at the mercy of pirate fleets and the strategic conquests of the strongest Mediterranean powers. From the Greeks to the Romans, Venetians and Turks, each conquering culture left its mark on this eternal crossroads between East and West.

The confluence of cultures that define Crete’s history lend it a national identity that is entirely unique from the rest of Greece. Even today when the locals refer to their traditional dishes, or local products like olive oil or honey it’s always as “Cretan,” never Greek.

In fact, it wasn’t until 1913 that Crete formally joined with Greece.

Sardinia and the Maddalena Islands 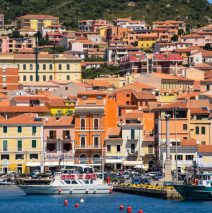 After dedicating our first full day in Sardinia to a day trip to Corsica, we weren’t exactly sure what to do with our other full day. We had wheels (about the only positive statement I can make about the ridiculous Smart Car, it did have wheels) so we had the freedom to go wherever we liked with our second day. But as I mentioned before, Sardinia is a huge island and the driving distances are fairly long, especially with mountain roads, so we needed to narrow down our day to a specific region.

Our helpful front desk clerk at the Hilton Olbia and the car rental guy had both highly recommended the ferry over to Maddalena Island and after a little research we decided that would be a great way to spend our day.