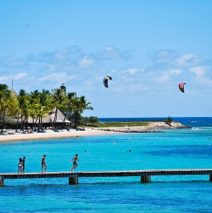 It’s been called “Paris in the Pacific” but other than the language and a certain chic attitude you won’t find many similarities to the bustling French city. However, you will find lush mountains, pristine beaches and the world’s largest enclosed lagoon on the Pacific’s 3rd largest island behind Papua New Guinea and New Zealand. The cosmopolitan capital city of Noumea New Caledonia has posh resorts, elegant boutiques and strong trade winds that lure some of the world’s greatest kite surfers each November for the World Championships. Branch out from Grande Terre (the main island) to the beauty of the Loyalty Islands or catch a ferry to nearby Ile de Pins for a taste of South Pacific tribal life with the indigenous Kunie people. No matter where you travel in New Caledonia, it’s hard to make a wrong turn on these spectacular islands. 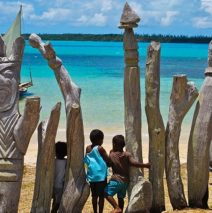 More tribal village than tourist destination, this tranquil paradise is still home to the indigenous Kuniés. The tiny island of Ile des Pins New Caledonia is famous for its ancient Melanesian pirogues and the local tribes still sail these wooden watercraft with their triangular sails though the crystalline bays each day. A pirogue excursion to one of the many nearby atolls will make you feel like you’ve been lost at sea. Around the island you’ll find an abundance of picture perfect white-sand coves shaded by the towering pines that lend Île des Pins (Isle of Pines) its name. Take the ferry over from more accessible Noumea and spend the day exploring this little-known South Pacific treasure or, for a real indulgence, spend a few nights at Le Méridien Île des Pins, the island’s only luxury resort. 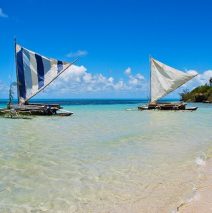 Here’s just a rough list of current or former French colonial islands (many of whom are still speaking French to this day):  Tahiti, New Caledonia, Mauritius, Martinique, St Croix, St Kitts, Vanuatu, St. Martin and Reunion. I have only been to two of these so far, but they are two of the most gorgeous islands I’ve ever seen anywhere in the world.

Though most of these islands no longer fall under the French flag, the country’s cultural legacy often remains. When I first took up French in high school, I never thought it would be so useful in real life.

When I began traveling overseas, I was excited to brush up on my language skills for trips to France. But I always thought that would be the only place I would use my remedial French language skills. Not so!

You’d be amazed how often I’ve been able to use French in my travels.  Morocco, Vietnam, Cambodia and, of course, some of the most beautiful islands the world has to offer. Not to mention 90% of Northern Africa. Yes, the French have been busy over the years.