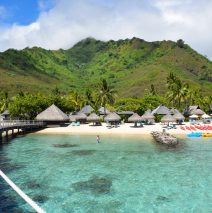 Photo of the Day – The Hilton Moorea Lagoon Resort 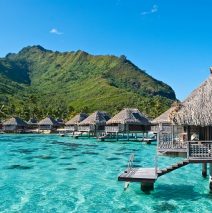 It’s one of French Polynesia’s lesser-known islands but, for my money, it’s the best. With all the beauty of Bora Bora minus the crowds and the prices, Moorea is the stuff of South Pacific dreams. I sometimes call it the “Kauai” of French Polynesia. Follow me for a second…Tahiti (like Oahu) is the main island where all the traffic and crowds are; Bora Bora (like Maui) gets all the press and the honeymooners…and Moorea (like Kauai, in my opinion) is the true unspoiled paradise. Where a tranquil, overwater bungalow can often be had for half the price of those on big-sister Bora Bora. Easily reached by 30-minute ferry from nearby Papeete, the Hilton Moorea Lagoon Resort & Spa is nestled between two brilliant bays on the heart-shaped garden isle of Moorea. Plush bungalows sit perched atop the resort’s best asset, a crystal-clear lagoon teeming with coral and tropical marine life. You can easily spend an entire day (or more) snorkeling the Hilton Moorea lagoon and never tire of this spectacular underwater world. From inside your bungalow, the show continues through a glass panel in the floor known locally as “Tahitian Television.” The bottom line? If you’ve been saving up those Hilton Honors points, this is the place to spend them!

You can file this one under, “the travel rich keep getting richer.” I was lucky enough to go from the paradise of the Cook Islands to the Eden of Moorea.

I should mention that up until last week, I thought Moorea was the most beautiful place I’d ever seen. And then there was Aitutaki. Does it get any better than a direct flight between bliss and nirvana? I think not.

My Air Tahiti flight from Rarotonga to Papeete was a flawless 2 ½ hours and almost totally empty. I landed in Papeete at 2:15pm and made record time getting to Moorea (there’s little of redeeming value in Papeete, so the best thing to do is get out as fast as you can). I made it through immigration and customs, reclaimed my bag and was in a cab by 2:30pm.

In town, I had my cab driver wait for me outside a bank so I could change a little money (Moorea may be paradise but it doesn’t come cheap…or with ATM’s) and then drop me at the Aremiti Ferry. I caught the 3:00pm ferry to Moorea and by 4:00pm I was settling into my magnificent overwater bungalow at the Hilton Moorea Lagoon Resort & Spa.

The weather was decidedly overcast but I didn’t care. I was so happy to be back in Moorea and I was convinced that the sun would come out eventually. 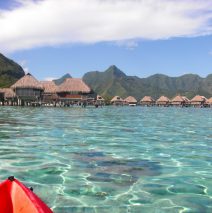 There are two ways to get from the island of Tahiti to Moorea – a 30-minute ferry ride or an 8-minute flight; I chose the ferry. Partly because it is substantially cheaper (only about $12), but also because I thought the ferry ride would be scenic and fun. I only know two people who have been to French Polynesia before and both turned up their noses when I told them I was going to Tahiti. “Leave Tahiti as quickly as possible,” they said, “get out to Moorea and Bora Bora.” Sounded a bit snobbish, I thought, how could Tahiti not be worth a few days’ visit? Is it possible I have friends that are too good for Tahiti? Surely not.

But as the ferry passes between the breakers through the Viaire pass and I get my first look at Moorea’s stunning lagoons, now I am starting to understand. The distance between islands may be only 12 miles but arriving at the ferry port in Moorea is like entering another world. The island is ringed by a coral reef enclosing a narrow lagoon. Though, I do still think Tahiti is worth a visit, there are hues of brilliant blue surrounding the island of Moorea that I’m not sure I’ve ever seen before in all of my travels. This is quite possibly the most beautiful place on earth.

Blowing the Budget in Tahiti

My Air Tahiti Nui flight from Auckland to Papeete, Tahiti was 5 hours long but after all the marathon flights I’ve been on lately; it seemed to go by in a flash. The most interesting part was that I left Auckland at 3pm on February 2nd and landed in Tahiti at 9:00pm on February 1st (thanks to a crossing of the International Date Line). It’s a little weird that I had to pay for a hotel for the night of Feb 1st…TWICE!!

We landed at Faa’a International Airport on the island of Tahiti at 9pm local time so, unfortunately, it was dark and I couldn’t see anything exciting on approach. We were greeted on the tarmac by ukulele music and a pair of Tahitian ladies handing out “tiare” flowers (the island gardenia) to be worn behind the ear. The tiare flowers smelled heavenly and it was kind of funny to see even the men at baggage claim with a little white flower behind their ear.