The Song of the South Pacific: Fiji & the Mamanucas 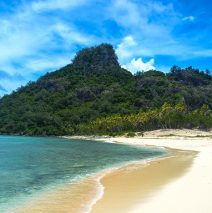 “Ooohhh, who owns that yacht?” we asked with envy as our high-speed catamaran docked back at Denarau Marina. “My 2nd husband,” joked Ma, as laughter filled the Captain’s Lounge. We’d just returned from a day of sailing through Fiji’s Mamanuca Islands and Makereta (or just “Ma” as she preferred to be called) was our cheerful hostess and Cruise Director for the voyage. It had been a simply spectacular day and the Fijian people like Ma were a big part of the reason why.

People often throw the word “paradise” around with reckless abandon (I myself have likely been guilty of that) but for me, the South Pacific truly defines the word. I’ve been lucky enough to see a lot of this region (Tahiti, Bora Bora, Moorea, New Caledonia, Samoa, Tonga, the Cook Islands, Vanuatu and Easter Island) and for my money, there’s no better overall South Pacific destination than Fiji. 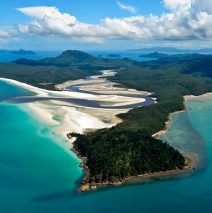 Situated just off the central coast of Queensland, Australia, the collection of continental islands known as the Whitsunday Islands are a popular home base for visitors to the Great Barrier Reef. At the center of the island group, the largest and arguably the most beautiful, is Whitsunday Island. Stretching more than 4 miles along the coast of the island, the sand of Whitehaven Beach is made up of 98% pure silica and was named the world’s top Eco Friendly Beach by CNN.com in 2010. The dramatic swirls of sand and sea known as Hill Inlet Whitsundays are a stunning sight from the air and made an already incredible helicopter flight over the Great Barrier Reef one of my most memorable travel experiences ever. Australia is one of the most popular holiday destinations for Brits and, with all the country has to offer, it’s not hard to see why. Take a look at some of the tailor-made holidays at FlightCentre.co.uk to see what’s available to you. 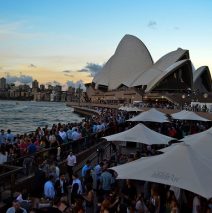 After a long work week in Sydney (for those who live there, of course, not for me) there’s no better way to kick-off the weekend than with a sunset cocktail at Opera Bar Sydney. With sweeping views of the famed Opera House, the Harbour Bridge and the entire Sydney skyline, it is one of the world’s most scenic happy hour hotspots. And after spending a full day exploring the nearby Blue Mountains with Antarctica-bestie, Angela, we could think of no better way to spend our last night in the city than to do as the locals do and unwind while enjoying the views from Opera Bar Sydney. Watching the bridge climbers, listening to live music and sipping a glass of wine…there’s simply no better place to be in Sydney on a summer Friday night. 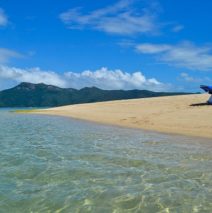 It’s not every day you get to bury your toes in the sand on your own private island; but that’s exactly what I was lucky enough to do while staying at the Hayman Island Resort in Australia’s Whitsunday Islands last month (2017 update, this fabulous hotel is now the One & Only Hayman Island Resort).

This luxurious Great Barrier Reef resort offers “Island Escapades” that allow guests to take a day trip to nearby uninhabited islands. Tiny Langford Island Whitsundays is reduced to a mere sand bar at high tide but when the Hayman boat dropped me off with just a chair, umbrella, snorkeling gear and an emergency cell phone, it was more than enough island paradise for me.

I snorkeled, lounged and enjoyed the warm Aussie sunshine as I peered over the top of my book back at lush, green Hayman Island in the distance. So far from civilization and yet so close. Sometimes a little solitude is the greatest luxury of all and my afternoon on Langford Island Whitsundays was one of my favorites of RTW #8.

I started out with a very loose plan for the Great Barrier Reef. In fact, in a rare display of spontaneity, I didn’t firm up a hotel until just a few days before I arrived – unusual for an obsessive planner like myself. The first thing I learned about the Great Barrier Reef area is that there are a lot of options for where to stay. There’s a reason it’s not called the “small barrier reef” or the “medium-sized barrier reef .”

The Great Barrier Reef region is served by several airports from Cairns in the north to Hamilton Island in the south. The two most popular destinations for visiting the reef are Cairns or the Whitsunday Islands. The first step was deciding which area I wanted to visit so that I could book flights from Sydney to the best possible airport. Ultimately, I decided I couldn’t resist the draw of the Whitsunday Islands near the southern end of the reef.

So after meeting such a great group of Aussies from the Sydney area on my Antarctica cruise, I decided to spend my first two nights in Sydney so we could all get together for a BYOP (Bring Your Own Penguin) reunion to rehash our Antarctic adventures and catch up. Luckily, my new best bud from the cruise, Angela, was able to take the day off from work on Friday and drove down Thursday night from Newcastle (about 2 hours from Sydney) to join me for my two-night stay in the city.

I arrived bleary-eyed at 7am in Sydney after back-to-back redeyes and a full day layover in Seoul on the way from Phuket. Thank God for the Four Points Sheraton Darling Harbour (2017 update, this hotel is now a Hyatt Regency) where the front desk was kind enough to check me in at that ridiculously early hour. The Four Points occupies a prime location on Darling Harbour and I’d spent a very enjoyable stay there on RTW #2 over Australia Day weekend where I had a magnificent view of the fireworks over the harbour.