Photo of the Day – Innsbruck, Austria 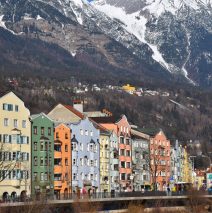 While visiting Germany last week, I decided to take a drive down to check out the alpine ski resort town of Innsbruck, Austria.

The provincial capital of Tyrol, Innsbruck is Austria’s 5th largest city and the biggest ski resort in the Alps. In the 15th century, Innsbruck was a center of European politics and many of the late-medieval style buildings still remain in the heart of the city’s picturesque old town.

As an internationally-renowned winter sports center, Innsbruck has played host to both the 1964 and 1976 Winter Olympic Games. To explore everything the city has to offer, book a room at the centrally-located Penz Hotel. The city’s first design hotel, this modern and luxurious property is situated in the heart of Old Town.

From the alpine views to the pastel-colored buildings lining the River Inn – a tributary of the Danube – Innsbruck Austria’s city center is well worth a visit before hitting the slopes. 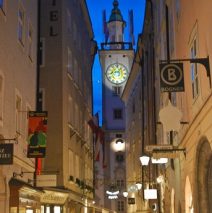 It’s the birthplace of 18th-century composer Wolfgang Amadeus Mozart and the winding streets of this charming Alpine town just might inspire you to burst into song. Salzburg is the heart of music and culture on the northern edge of the Alps but it’s more than just Mozart and The Sound of Music. The well-preserved architecture of stunning Old Town Salzburg (Altstadt) is often referred to as a “Baroque Jewell” and was listed as a UNESCO World Heritage Site in 1997. Massive Hohensalzburg Fortress towers over it all with sweeping views over the Salzach River and the Alps. Whether you’re dining at Europe’s oldest restaurant or singing Do-Re-Mi in the Mirabell Gardens, you’ll find Salzburg delightful. 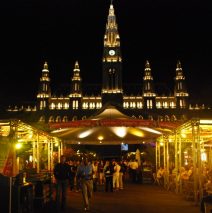 Just shy of 3 hours after leaving Salzburg on the train, we arrived in Vienna. Things started off on the right note with a good upgrade at our beautiful hotel, the Le Meridien Vienna. Finally, a real suite – no more of this “junior suite” nonsense. Now, we’re talking.

After settling in at the hotel for a bit, we charged out into the afternoon to explore Vienna.

We started with a walk down the pedestrian plaza Kartner Strasse, past stunning St. Stephen’s Cathedral and toward the Danube River. The plan was to buy tickets on the 9:45am Danube Hydrofoil to Bratislava for the next day and then take the train from Bratislava to Budapest. And it’s a good thing we did go buy tickets early because the 9:45 was already sold out, we had to settle for the 8:30am – more sleep gone.

A Struggle to Salzburg Austria

After saying goodbye to Dena at the airport in Zurich early this morning, Shannon and I boarded our flight for Vienna. The plan was to rent a car at the airport and drive to Salzburg Austria for Saturday night before returning to Vienna to spend Sunday night. Unfortunately, sometimes things don’t work out quite like you planned.

When we landed in Vienna around 10am, every rental car place was sold out and the airport was a madhouse. So, we went to Plan B – take the airport train into Vienna and try to find an available rental car there. (Plan C was just take the darn train to Salzburg.)

We had hoped to rent a car because between the two of us, round trip train tickets would be about $200 and we knew we could split the cost of a car for half that. We never thought availability would be such an issue, who knew?

By the time we got the train into town and took the metro to the main train station, it was almost noon. There were two rental car counters in the train station but they were both closed for the weekend. Out of options, we went to Plan C and bought train tickets.